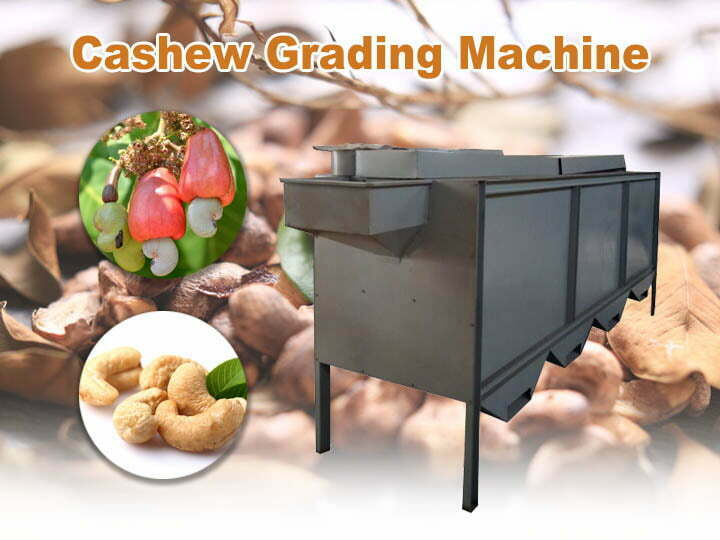 Cashew grading machine is an essential machine for the processing of cashew nuts. It is a machine before cashew nut peeling. This machine can effectively divide the cashew nuts into 3-5 grades according to their size. Compared with traditional manual picking, the cashew fruit grander greatly shortens the working time, saves human resources and ensures the quality of cashew nuts. Different grades of cashew nuts are sold at different prices on the market. You can get more profit by grading the cashews when selling them or making subsequent processing.

Introduction of the Cashew Grading machine:

The Components and Operation Methods of the Cashew Grader:

The machine is composed of transmission structure, grading structure, frame, and some other parts.

How does the cashew grading machine work?

The main screening component of the cashew fruit grader is a rotating classifying cylinder. Inside the classifying cylinder, there are three different sieves from large to small. During the operation of the machine, the cashew nuts rotate with the classification cylinder, and the smaller cashew nuts are first selected from the holes, and the slightly larger cashew nuts are pushed into the lower sieve during the rotation of the drum, and so on. Achieve the rating effect.

( Note: this machine can be customized.)

The figure shows the parameters of large and small raw cashew grader, and the output is 400kg / h and 2000kg / h respectively. But if you have other needs, Taizy machinery can provide you with customized services.

How to Use Salmon Slicer Machine?

The Groundnut Roasting Machine Was Sent to Indonesia