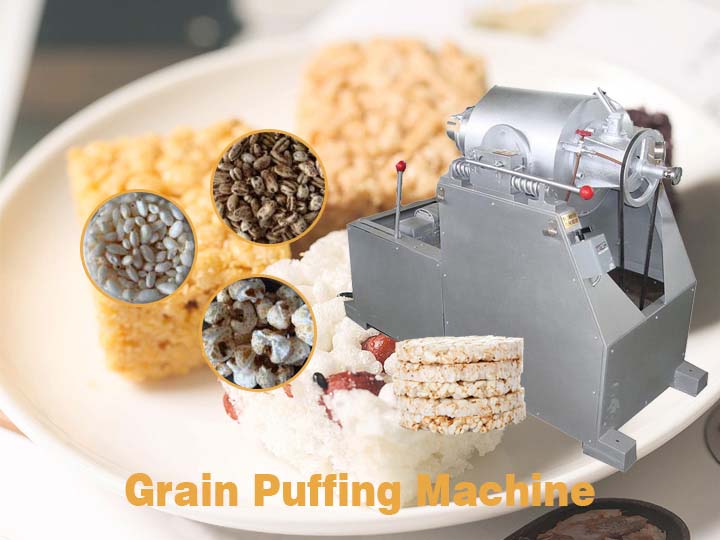 Grain puffing machine is used to puff corn, wheat, barley, rice, sorghum, and other grain machinery. By continuously heating the puffing tank, the moisture of the material in the tank is continuously evaporated, and the puffing effect is produced under the action of pressure. Because of cereal popping machine efficient production capacity and high safety, many puffed food products manufacturers choose our machine

A proper amount of material is put into a sealed expansion tank with a cover, heated by liquefied gas, natural gas, coal or gas, and rotated continuously at a certain speed to make the material uniformly heated. With continuous heating, the temperature inside the tank gradually increases. When it reaches 100℃ or above, the surface and internal moisture of the material will escape and vaporize, and a certain pressure is formed in the tank.Finallly, when the moisture content of the material evaporates about 5% – 8%, the pressure in the tank will reach 0.8-1.25 Mpa (the pressure of different materials is different).

At this time, the materials in the tank are basically mature. If the lid of the tank is suddenly opened, the material is suddenly released from high temperature and high pressure to normal temperature and pressure. Then the space of water loss inside the material will be rapidly enlarged by air filling, and its structure will change. Raw starch (beta-starch) becomes mature starch (alpha-starch), and its volume will expand a few times. More than ten times. At the moment of release, the material will be ejected from the outlet. At the same time, it will produce huge noise, and the sound will reach about 100 decibels.

Characteristics of the grain puffing machine:

How to make puffed rice cereal?

1. First, prepare fresh rice. Do not use heat, yellow, and deteriorate rice.

2. When using the grain expander for the first time, heat the empty pot to 120 ℃. And then turn it off. Loading raw material, blending with 50g edible talcum powder. (The raw material have to follow the request: no miscellaneous things, no broken pieces, and contained water rate ≤15%)

3. According to the operation procedure strictly to carry on produce: Loading procedure: loading material →covered →tighten the cover →switch on →the heating.

In the process of heating, switch on tumbler switch every 3~4 minute once, change direction and make material heating more even. adjust the thermodynamic power smaller 1/2 at 2~3 minutes before discharge.

4. Discharge procedure: pull the buffer bracket under the pot→switch off →shut down →lock tight →fire off.

Discharge procedures are very important, do not make a mistake.

A Customer from Costa Rica Bought the Jacketed Pan from Taizy

Why Do Customers Choose Our Almond Cutting Machine?

What Are the Characteristics and Price of Automatic Chicken Cutting Machine?