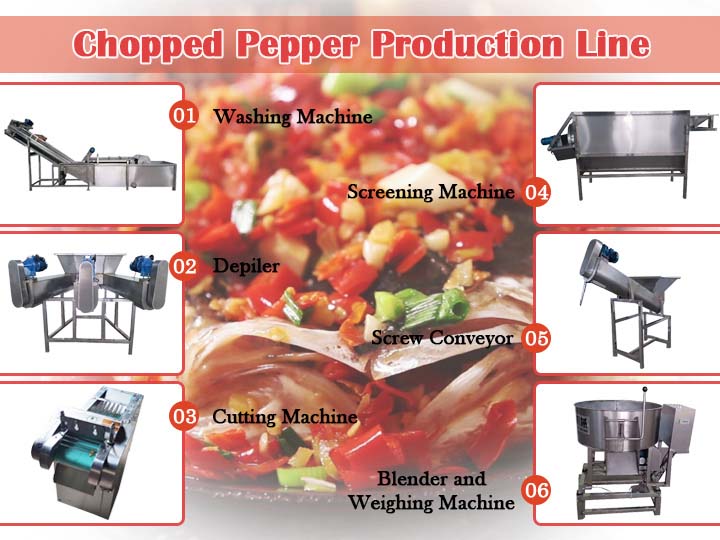 The chopped pepper production line is a production line that integrates pepper cleaning, cutting, sieving, weighing, and mixing. Spicy ingredients in the pepper can stimulate the appetite and increase digestion. And the pigment in the pepper has an antioxidant function. In particular, the vitamin C content of peppers ranks first among all vegetables. As an important seasoning, pepper is generally processed into dried chili or made into chili sauce, pickled pepper sauce, or processed into a spicy flavored compound seasoning with chili as an auxiliary.

How to make chopped pepper sauce?

The process of making chili sauce:

The pepper washing machine is the first machine in the chopped pepper production line. The pepper washing machine is made of high-quality 304 stainless steel and is mainly composed of a water tank, roller, conveyor belt, high-pressure water jet nozzle, motor, and other devices. This machine uses high-pressure spray and vortex bubble tumbling to clean the pepper. The pepper is placed in the water tank, and the water in the water tank is continuously tumbling to form a bubble. And the air bubble generates a strong impact force when it comes into contact with the material, which can clean the dirt on the surface of the material and the residual pesticide.

In the process of the material rising with the conveyor belt, the high-pressure spray water pipe will clean the material twice to achieve a thorough cleaning. By the way, you’d better cut off the pepper stems first.

The distributor is the key to increasing production efficiency in the chopped pepper production line. And this machine supports customization. The efficiency of a single pepper cutter can’t keep up with the speed of the pepper washing machine. Therefore, after the cleaning is completed, the pepper needs to be first transferred to the hopper of the distributor. The machine is very simple in structure, and each conveying pipe has a screw-pushing device that can transport the peppers to different pepper-cutting machines at the same time.

The pepper cutting machine is also called a multi-function cutting machine, which is suitable for cutting all vegetables and fruits in a chopped pepper production line. This machine mimics the principle of artificially cutting peppers, and can process pepper products of various shapes such as pepper segments, pepper rings, and pepper blocks.

In addition, the length of the cut section can be adjusted arbitrarily within 2-30mm, satisfying customers who have different requirements on the output and length of the cut. It has the characteristics of stable performance, simple operation, and strong adaptability. It is the best choice to replace artificially cut pepper, which can maximize the economic benefit of pepper processing users.

The roller screening machine is composed of a motor, a reducer, a roller device, a frame, a rapping device, a sealing cover, an inlet, an outlet, etc. The roller unit is mounted obliquely on the frame. The motor is connected to the drum device by the reducer through the coupling, which drives the drum device to rotate around its axis. The main purpose of screening is to remove peppers that have not been cut off or whose size does not meet the requirements, and then transmit them to the pepper cutter through the conveyor belt for further cutting. The machine is equipped with a dust-proof cover, which can reduce noise while creating a good working environment.

In the chopped pepper production line, screw conveyor is widely used in various industries, such as electric power, metallurgy, chemical industry, grain, and so on. But it is not suitable for conveying viscous, caking, and changeable materials. Its characteristics are as follows: good sealing, reliable operation, low manufacturing cost, and convenience for intermediate loading and unloading. This machine can be matched with the last step of weighing the mixer. When the set weight is reached, the screw conveyor can automatically stop feeding. After mixing, the material can be fed again.

This machine integrates weighing and mixing. There is a weight sensor in the lower part of the machine. When the set weight is reached, the signal is automatically sent to the screw pusher to stop the transportation. When the material enters the machine, it begins to stir. During the stirring process, salt, edible oil, and other food additives or condiments are added to make the flavoring. After the production is completed, the material can also be discharged automatically. It’s very convenient and fast to use.